Canadians won't be allowed to work on portions of new Canadian spy planes because of U.S. security regulations 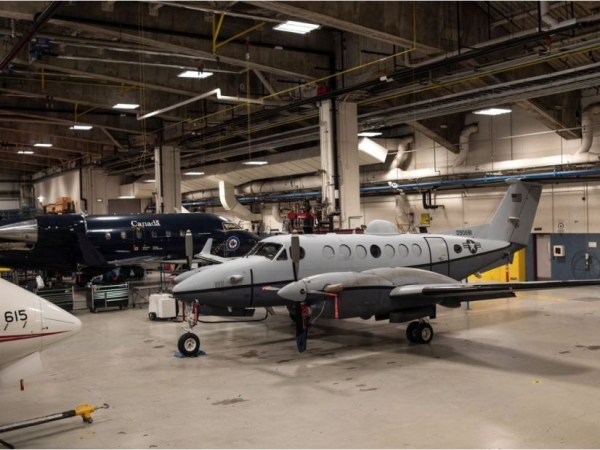 Canadians won’t be allowed to work on parts of the country’s new surveillance aircraft because they contain sensitive American-made equipment that can only be handled by U.S. citizens.

Maintenance of the equipment, installed in new planes that will be operated by Canadian special forces, will be off-limits both to Canadian military personnel and Canadian aerospace workers. Instead, the gear or the aircraft will have to be sent to the U.S. for maintenance or U.S. government staff will have to travel to Canada to work on the planes. The equipment is subject to strict U.S. security regulations.

Canadian special forces are to receive three surveillance aircraft from the U.S. government. The planes are expected to arrive in spring 2022. The Beechcraft King Air planes, to be based at CFB Trenton, will be outfitted with sensors and equipment to intercept cellphone and other electronic transmissions, and track individuals and vehicles on the ground. Canadian special forces and, potentially, other federal government departments and the RCMP will use the aircraft for missions overseas and in Canada.

Canada is paying the U.S. government $188 million for the aircraft. The overall value of the project is estimated to be $247 million. The funding includes the acquisition of the aircraft and prime mission equipment from the U.S., and an initial portion of the associated in-service support of the planes. The main contractor is Beechcraft in Wichita, Kan.

The maintenance plan for the sensitive equipment that only Americans can work on has yet to be put in place, but the Canadian military is hoping it won’t disrupt aircraft operations too much.

“Arrangements for the maintenance of certain specialized equipment are not yet in-place; therefore, details and costs are not known at this time,” Public Services and Procurement Canada spokeswoman Stéfanie Hamel noted in an email. “However, Canada will ensure the sustainment strategy supports continued operations while maintenance is underway.”

The government has not provided details on what parts of the aircraft are covered by the U.S. security regulations.

Another in-service support contract, for the aircraft themselves and related mechanical equipment, will also be put in place. Canadians will be able to do that work.

A request for proposals from Canadian firms for that work is expected to be issued in January or February. The contract would cover maintenance and support over a 20-year period.

Canadian aerospace firms had originally wanted to provide the aircraft and on-board equipment, and in 2013 a number of companies responded when the federal government initially outlined its need for such planes.

But the Canadian military decided it needed the planes more quickly than they believed Canadian companies could deliver. The military was also concerned there could be delays if the on-board sensor equipment used was subject to U.S. security regulations.

The Canadian companies, however, felt they could meet the military’s needs with Canadian-made equipment that wouldn’t be covered by U.S. regulations, allowing Canada more flexibility.

But the Canadian government instead opted for the American-made solution, which had also been used by Canadian special forces in Afghanistan. The agreement for the aircraft was finalized on April 26, 2019 with the U.S. government.

Canadian special forces personnel recently trained with similar surveillance aircraft operated by the U.S. In mid-November members of 427 Special Operations Aviation Squadron and the Canadian Special Operations Regiment, both based in Petawawa, conducted an exercise supported by one of the American aircraft. The U.S. plane operated from the Ottawa airport, and flights occurred between Petawawa and Mansfield-et-Pontefract, Que., according to Canadian special forces.

“The intent was to conduct a training and needs assessment to ensure the appropriate personnel are trained and equipped to support the arrival of three Beechcraft King Air 350ER as part of the command’s Manned Airborne Intelligence, Surveillance and Reconnaissance project,” Maj. Amber Bineau, spokesperson for Canadian Special Operations Forces Command, said in an email.