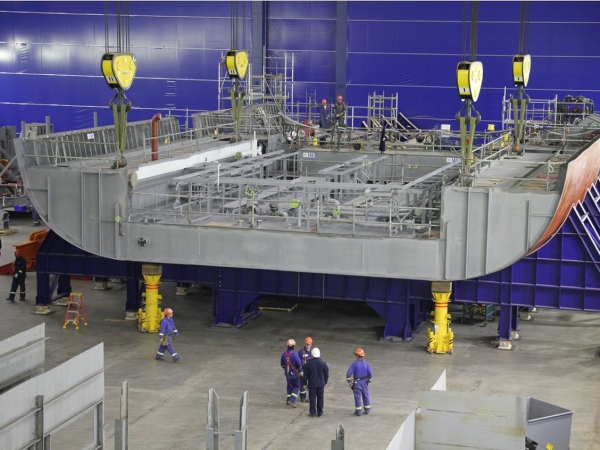 Defence industry executives have been told by a top bureaucrat to stop raising concerns about the controversial program to build a new fleet of warships that is now estimated to cost $70 billion and could go even higher.

Company officials have been complaining to politicians and media outlets that the Canadian Surface Combatant project has fallen far short on its promises of creating domestic employment. Another company is in the middle of a lawsuit over the Canadian Surface Combatant or CSC, alleging the procurement was bungled. Federal lawyers are trying to limit the amount of information that can be disclosed in court about the project, with the next hearing to be held Jan. 13. Other industry executives have been warning politicians the rising price tag for CSC will jeopardize funding for other equally important military equipment projects.

But Jody Thomas, deputy minister of the Department of National Defence, told executives Oct. 5 that they are hindering the project and she characterized their efforts as being those of sore losers. “I think there’s still too much noise from unsuccessful bidders that makes my job and Bill’s job very difficult,” she said, referring to Bill Matthews, deputy minister at Public Services and Procurement Canada.

The CSC project would see the construction of 15 warships for the Royal Canadian Navy at Irving Shipbuilding on the east coast. Construction of the vessels, to replace the current Halifax-class frigate fleet, isn’t expected to start until 2023. But the project has already faced delays and significant increases in cost as the price tag has climbed from an original $14 billion estimate to around $70 billion.

In an email to this newspaper about Thomas’s statement to defence executives, the DND noted that industry officials have the right to raise their concerns with politicians or turn to the courts if needed. “However, the Department of National Defence, including the Deputy Minister, works for Canadians,” the DND stated. “While we maintain close, positive working relationships with industry, our primary responsibility is to the Canadian taxpayer.”

But Thomas’s admonishment didn’t surprise industry representatives; although they won’t go on record with their names for fear of jeopardizing future military contracts, a number of executives point out that for years federal officials have tried to keep a lid on questions and concerns as well as information about the CSC.

A review of past actions by the current Liberal and previous Conservative governments and internal documents obtained by this newspaper through the Access to Information law appear to support that view.

Federal officials have on two occasions tried to stymie attempts by the Parliamentary Budget Officer to obtain details and budget outlines of the CSC project, as well as with other vessel construction programs under the government’s National Shipbuilding Strategy.

In 2019, officials with Public Services and Procurement Canada issued a directive that firms interested in maintenance work on the Canadian Surface Combatant program could not talk to journalists and instead must refer all inquiries to the department. That was the fifth such gag order on military equipment projects issued by government over a year-long period.

In one case, Procurement Canada threatened to punish any firms who violated the gag order on the proposed purchase of a light icebreaker. That prompted one unnamed company to submit a question to the department on whether a government ban on talking to journalists was even legal, according to records.

Industry executives pointed out last year the secrecy was not based on security concerns, but on worries the news media would be able to use the information to keep close tabs on the problem-plagued military procurement system. After this newspaper reported on the gag orders, Procurement Canada claimed last year it would no longer use such bans.

Michael Byers, a professor at the University of British Columbia who has produced two studies on the troubled federal shipbuilding program, said government officials have repeatedly tried to limit the amount of information available on the CSC and other shipbuilding projects. “These projects are in serious trouble and when you have those problems, combined with politics, the pressure to keep things secret are very very high,” he explained.

Federal officials appear to be concerned specifically about journalists who might be reporting on two particular ship projects; the CSC and the Arctic and Offshore Patrol Ships or AOPS. Both projects involve Irving Shipbuilding.

Documents show Irving representatives and bureaucrats from Procurement Canada (then called Public Works) warned DND procurement official Ian Mack in April 2013 that CBC journalist Terry Milewski was working on a story about the high costs of the AOPS and the fact that other nations paid a fraction of what Canadian taxpayers were being charged for similar vessels. Six days after Mack sent his warning out to other bureaucrats, Milewski produced his report.

In March 2019, the DND and Public Services and Procurement Canada warned Irving Shipbuilding this newspaper was asking questions about problems with welds on the AOPS. Documents show that after a series of questions were submitted by this newspaper to the DND, PSPC deputy minister Bill Matthews, DND deputy minister Thomas and Pat Finn, then DND’s top procurement official, held a conference call with Irving President Kevin McCoy.

McCoy briefed “Jody, Bill, Pat” about the company’s plans to sue this newspaper if it “published anything that impugned our professional reputation.” There is no indication in the document that the bureaucrats raised any objections to the company’s strategy. Thomas took no notes during the conference call, according to the department’s Access to Information branch.

Matthews responded to Irving’s decision with a supportive email. “Welcome to my world,” Matthews wrote to McCoy.

Matthews has declined requests to be interviewed by this newspaper. In an email, the department stated the deputy minister’s comment was referring to the fact defence procurement “is a highly complex environment, in which we often face criticism about our processes and decisions.”

DND confirmed to this newspaper that there had been minor issues with welding on the AOPS and the article was published.

In May 2019, the Globe and Mail also reported federal officials alerted Irving the newspaper was seeking information from the Department of Innovation, Science and Economic Development about whether the French fry plant investment qualified as an industrial benefit for the Arctic ship project. After the Globe sent two emails to the department’s media relations branch, the newspaper received a letter from a lawyer working for Irving. The letter threatened legal action if the article contained any allegations of improper conduct.

Innovation, Science and Economic Development spokesman Hans Parmar stated in an email that Irving was told of the media inquiry as part of the department’s policy to ‘’encourage transparency.’’

At the time, Irving spokesman Sean Lewis said while the firm respects the work of journalists, in the case of the Globe and this newspaper the company threatened legal action because the news organizations “had highly inaccurate information that would cause our company, and the reputation of our hardworking employees, considerable reputational damage.”

In the case of the Globe, Irving confirmed it had received the approximately $40 million industrial benefit credit for the French fry plant.

The incident with the Globe and Mail also revealed bureaucrats at Innovation, Science and Economic Development Canada had a system to alert Irving each time a journalist asked questions about AOPS. The department claimed it was required to do so according to its contract with Irving. However, that contract contains only a general reference to coordinating public communications. It is unclear whether the department has established a similar system for the CSC project.

The department did not answer questions about how many times it has shared information about journalists with Irving officials.

Asked about how many times Innovation, Science and Economic Development Canada has alerted Irving about journalists asking questions about shipbuilding matters, company spokesman Thomas Ormsby responded: “We do not discuss customer contracts.”