Under blue skies, the team wowed thousands in a special one-day edition of Aero Gatineau-Ottawa. The Red Arrows, who last performed in North America more than a decade ago, are conducting an 11-week North American tour that “aims to promote the best of British and deepen partnerships with close friends and allies.” The contingent includes 108 people, 12 Red Arrows Hawk T1 aircraft and one Atlas A400M RAF transport aircraft.

In their 55th season, the Red Arrows will travel coast to coast across North America, conducting aerobatic displays, flypasts and ground engagements. 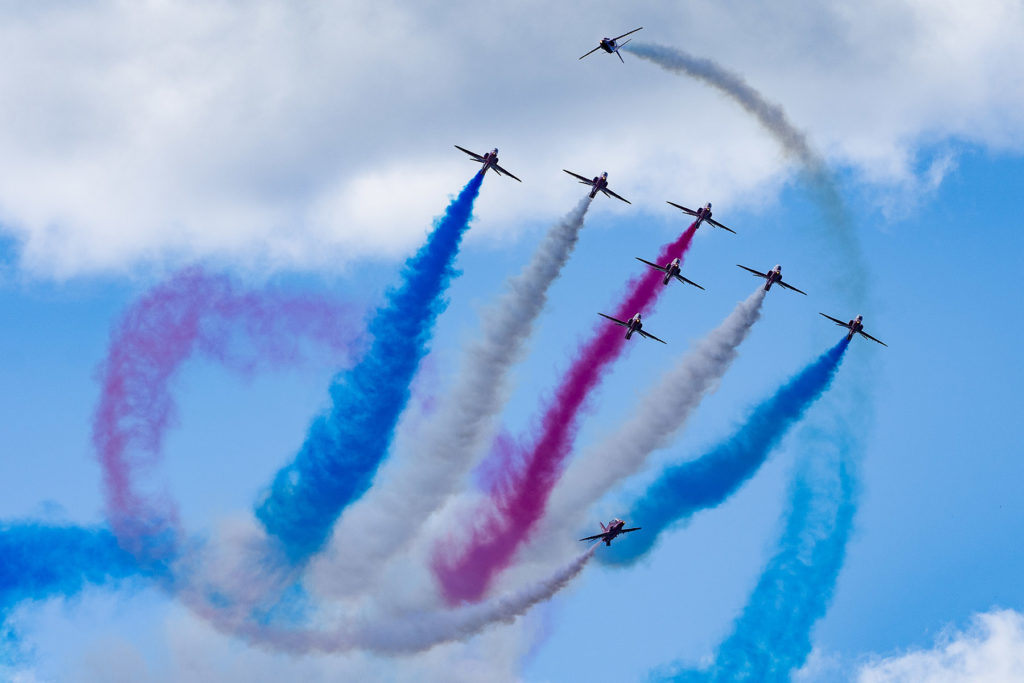 The Red Arrows use a mix of red, white and blue smoke during their performances to enhance visual presentation. Eric Dumigan Photo

The team’s leader, Martin Pert, leads the nine-plane formation in a series of manoeuvres with formations that salute the 50th anniversary of the Apollo mission; the Concorde, the world’s only supersonic commercial aircraft; the Second World War Lancaster bomber; and the Tornado, a multi-roll strike aircraft that was retired from the RAF in 2019. The team uses red, white and blue smoke to enhance its visual presentation.

The Red Arrows were formed in 1965 and have performed over 5,000 displays in 57 countries around the world. The Folland Gnat was replaced in 1980 with their current aircraft, the BAE Systems Hawk T1 trainer. The Hawk is a standard military two-seat advanced trainer with a tweaked engine to allow for faster response times.

The Red Arrows performed a flypast in Halifax this past weekend and will perform in Toronto on Labour Day weekend, and in Victoria and Vancouver between September 24 and 27.