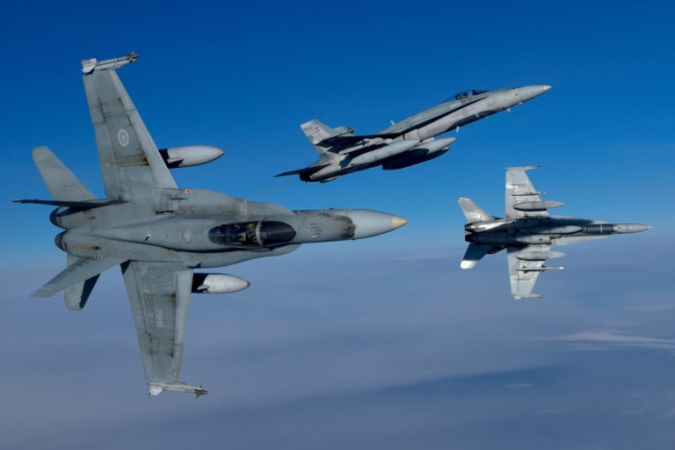 You can pick your own term. Generation 4.2? Gen 4.3? However you choose to define the upgraded Royal Canadian Air Force (RCAF) CF-188 Hornet, the fighter jet will have “operational parity” in a complex operating environment until the early 2030s.

“It’s not Gen 4, but it’s not a true Gen 4.5 like the (F/A-18E/F) Super Hornet. It will be somewhere between there,” said BGen Todd Balfe, a CF-188 pilot and special advisor to the Fighter Capability Office. “The term we use is, it brings us to operational parity against current threats. That is an implicit statement recognizing we don’t have operational parity right now. And that supports our [objective] of

bridging towards the future fighter.”

Under a program known as the Hornet Extension Project (HEP), the Air Force will upgrade its entire fleet of 94 aircraft to meet international aviation regulations and ensure interoperability with the United States and other allies, including NATO. It will also enhance the combat capability of 36 jets to operate globally against current threats.

The program addresses what the RCAF is calling quantitative and qualitative capability gaps. The delivery and upgrade of 18 operational Australian F/A-18A Hornets, which will expand the current fleet of 76 to 94, gives the Air Force the necessary quantity to meet concurrent NORAD and NATO obligations.

Upgrading the sensors, weapons, countermeasures and mission support of approximately two squadrons worth of fighters will resolve the qualitative concern.

Previously two distinct projects to comply with changing civil aviation regulations and allied capabilities and to modernize combat capability, HEP will be completed in two phases.

“It will allow the aircraft to operate in civil airspace out to 2032, but more importantly … to interoperate with allies,” said Balfe. “Our NATO allies and our U.S. allies are upgrading the interoperability standards on all their fleets of aircraft.”

The second phase, to be completed on the 36 Hornets with the most remaining operational life, will follow shortly after. Though select weapons and sensor systems were upgraded prior to Operation Impact over Iraq and Syria in 2014 and 2015, the CF-188 has not had a major overhaul of its combat capability for almost 15 years, Balfe acknowledged.

The most significant enhancement will be to the sensing capability, in particular the radar. The Air Force will replace the AN/APG-73 mechanically scanned radar, a multimode airborne radar system developed in the 1980s by Hughes Aircraft, now Raytheon, with a vastly improved APG-79(V)4 Active Electronically Scanned Array (AESA) radar, now standard on so-called fifth generation fighters and many allied upgraded fourth generation aircraft.

“An AESA radar gives you much greater detection, less probability of being detected, and more capability to track and identify airborne and even surface targets,” said Balfe. “It is a scaled down version of the radar that is in the Super Hornet.”

The Fighter Capability Office looked across allied F-18 operators for examples and “quickly landed upon the U.S. Marine Corps,” which operates a C variant of the Hornet, he said. “They have embarked upon a very similar upgrade path … so much of the engineering effort has already been done. We will partner with the Marine Corps and put that in our aircraft.”

The Hornets will also receive a new F/A-18A Wide Band RADOME to “be able to accommodate the full capability of the AESA radar,” he added.

“All the weapons are currently integrated on Marine Corps F-18s” and are used by select NATO allies, noted Balfe. “They are a significant increase in capability and survivability for our pilots.”

Given the age of the Hornets, which were designed in the 1970s and produced in the 1980s, there would be limited value in modifying the airframe or enhancing the electronic warfare system to further increase survivability — the RCAF is anticipating about seven years of service life once the upgrades are completed in 2025.

But the Air Force will add new expendable chaff and flare, the ADM-141C Improved Tactical Air-Launched Decoys, and an Automatic Ground Collision Avoidance System (Auto GCAS). “The system was not technically feasible before,” said Balfe. “It is now. The Marine Corps has found a solution.”

Lastly, the RCAF will expand mission support and security with a new Joint Mission Planning System (JMPS) and security upgrades to portable, temporary secure facilities to conduct simulated weapons training and mission planning for pilots. “These new weapons come with a higher level of security,” he said, noting that the CF-188 operates at secret or below while newer fighters require top secret level classification.

Though the enhanced combat capability might not match that of a true Gen 4.5 or greater aircraft, it will serve as a “transition activity” to the future fighter, which remains “on track,” said MGen Michel Lalumiere, chief of Fighter Capability.

The government still expects to award a contract in 2022 for 88 advanced fighter jets to replace the current Hornet fleet, despite twice adjusting the request for proposals deadline, now set for July 31, and the challenges of coordinating paperwork and other activity among the Fighter Capability Office, the Air Force, other government departments and the three contending companies while working remotely during the coronavirus pandemic.

Balfe suggested the combat systems introduced during HEP Phase 2, many of the which will be the same or similar on the future fighter, “will enable us to begin the transition of our people, our mindset, our procedures and our way of thinking for the capabilities that are going to come with the future fighter. We think HEP is a great bridge toward that path.”

While data from the various sensors will still be “fused” by the pilot rather than an onboard computer, systems in CF-188, the enhanced sensing and data transfer will mean a clearer operating picture among RCAF pilots that can be shared to a degree with allies. “It will bring our pilots into a different level,” he said.

One key approval milestone was reached on June 16 when the U.S. State Department approved the possible military sale to Canada of the AESA radar along with technical and logistics support, the RADOME, radios, data transfer units, the various missiles and tactical guidance units, the ADCTS, Auto GCAS, JMPS and other systems for an estimated US$862.3 million, according to the Defense Security Cooperation Agency. The combined HEP program is estimated to cost about $1.3 billion.

The Air Force is anticipating an initial operating capability of six Hornets through both Phase 1 and 2 in 2023. Full operational capability of the entire 94 aircraft is expected in 2025. “We are doing this very rapidly,” noted Balfe.

That timeline includes the introduction of 18 Australian flyable aircraft as well as delivery of a spares package and up to seven more F/A-18A jets for parts by 2022. So far, five have been delivered and two have completed testing and evaluation after undergoing a conversion program that includes Canadian  operational flight program software, cockpit configuration, a naval aircrew common ejection seat, night vision imaging systems, external lighting on the tail, changes to the landing gear and installation of the Lockheed Martin sniper targeting pod.

“The allocation (of the Australian aircraft) will be based upon squadron needs and aircraft fatigue,’ said Balfe. “One of the benefits besides helping close that quantitative capability gap, they give us a bigger pool of aircraft over which to distribute the stress and strain of [fighter operations]. They also allow us to have aircraft out of service while they are going through various phases of upgrades under HEP.”

Enhanced combat systems may put the CF-188 on a par with current threats for the next decade, but they don’t negate the need for a more modern fighter, Balfe observed. “We have a limited window where the upgraded CF-188 will have operational parity. Past that window, roughly 2032, it will most likely not have operational parity any longer.”