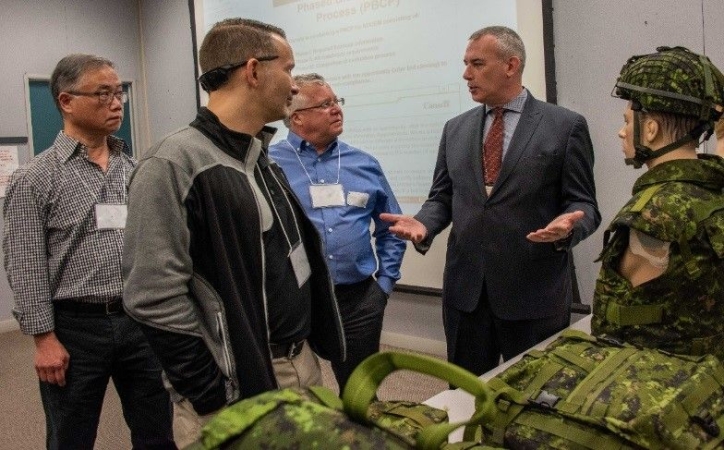 Industry representatives met with Canadian Army procurement staff on Wednesday to get a better sense of where the land force is going with the re-equipment of its soldiers.

The industry day took place in Gatineau and was focused on the Soldier Operational Clothing and Equipment Modernization or SOCEM project.

“The SOCEM Initiative is an integrated approach to procurement,” Lt.-Col. Ray Corby, from the Army’s Directorate of Land Requirements, said in a statement. “With it, we are replacing many clothing and equipment items in a single, coordinated effort rather than running many individual projects for separate equipment items.”

Through SOCEM, the Canadian Army wants to use technological advances made by industry and consult with companies in advance of a procurement being officially launched. Corby said such a process will help the Army better understand how industry can meet its needs as well as inform Army procurement staff about the expertise residing with the civilian firms.

As part of SOCEM, the Canadian Army is considering a newly-designed uniform pattern that may better reflect the current operational environment.

Last fall, more 600 soldiers at Petawawa were involved in testing what could be the new camouflage uniform pattern. It is being considered as a possible replacement for both the current arid (tan) and temperate woodland (green) camouflage used by the Canadian Forces.

The prototype pattern, developed by Canadian defence scientists, was predominately brown, with some green and black. The addition of more brown in the pattern “reflects the desire to bring it more into the middle of the spectrum and is not necessarily tied to a specific operating environment,” Corby explained in an interview last year with Defence Watch.

The current Canadian Disruptive Pattern, or CADPAT, has been in use since the early 2000s. The computer-generated pattern is highly regarded among camouflage designers. But Corby noted, “It’s definitely time for a refresh.”

Industry representatives who attended the meeting in Gatineau on Wednesday were also told that SOCEM could also involve various pieces of cold and wet weather clothing, such as ballistic cold weather goggles and hybrid combat shirts. The Canadian Army is also looking at new hearing protection and other equipment with the potential to prevent injuries and improve operational communications.