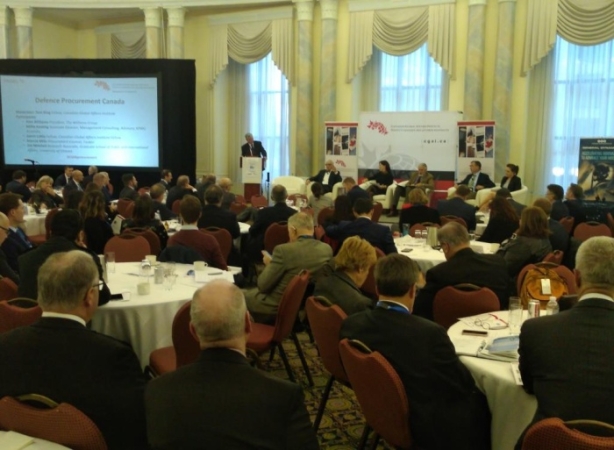 How well is Canada's defence procurement actually working, and are industry-boosters like ITBs paying off? These and other questions were tackled at the ‘Defence in the 43rd Parliament' one-day conference on November 20, 2019. It was staged by the Canadian Global Affairs Institute (CGAI) at the Chateau Laurier hotel, before a full house in the Adam Room.

During the opening session, ‘Canadian Defence Procurement – The State of the Union', DND Associate Deputy Minister Claude Rochette was cautiously upbeat about the state of Canadian defence procurements. In the last year, DND has signed about 12,000 contracts and spent about $6 billion on procurements, he said. Most of these contracts were on time and on budget.

2019's defence procurement spending is up from $4.9 billion spent by DND in 2016, Rochette noted. In addition, this year DND will “close out its budget” by spending its allocated funds, he said.

Despite some criticisms that Canadian defence procurements are not moving fast enough, “we are doing pretty well,” said Claude Rochette. But the process isn't perfect, he admitted. “We have more work to do.”

Asked which defence procurements are going well and which are posing challenges, Rochette replied that smaller projects that fall within DND's $5 million spending authority are easy to manage. Where issues crop up is in large multi-million dollar projects with long time lines: Trying to cost them accurately and manage them effectively is akin to asking, “I want to have a car and buy it next year, so tell me how much I'll pay for it (right now),” he said.

In a later morning session entitled, ‘Offsets – Is the ITB Policy Delivering?', the panel considered the impact of procurement bidders ‘overcommitting' to ITBs (promising financial benefits worth more than the contracts they are bidding for) on the Canadian defence industry.

Such ITB overcommittments, which can be worth 300% or more than the contract being sought, are “introducing unnecessary risk” in the Canadian defence industry, said Rich Foster, Vice President of L3 Harris Technologies - Canada. The result of overcommitting is that contractors are “now focussed more on quantity than quality” in making their procurement decisions, he said.

The real victims of ITB overcommittments are SMEs, which lack the resources available to large companies to pay for these big ITBs. The choice facing these SMEs is to directly/indirectly seek such contracts – which can run 20-40 years – “or you go out of business,” said Brian Botting, Director of Strategic Offsets at General Dynamics Missions Systems. “It is a terrible dilemma for them to be in.”

The CGAI procurement conference ended with the panel discussion, ‘Defence Procurement Canada'. This is the name of the integrated procurement agency the Liberals proposed during the October 2019 election, to replace the multiple ministries currently sharing this responsibility.

The common sense reason for having a single defence procurement agency comes down to human nature: “If you ask two of your kids to take out the garbage, it won't get done,” quipped Alan Williams, President of The Williams Group. “If you ask one of your kids, maybe it will get taken out.” He explained that sharing procurement among ministries causes requires agreement between multiple ministers and deputy ministers – which wastes time -- and that Canada's military allies manage their procurements through single agencies.

Creating a separate Defence Procurement Canada (DPC) agency would not be easy, said Jim Mitchell, Research Associate with the University of Ottawa's Graduate School of Public and International Affairs. Speaking from his own government experience, Mitchell observed that such changes are “disruptive, costly, difficult, hard on people, and hurt efficiency and effectiveness for a few years.” Mitchell added that creating DPC would not prevent Treasury Board and other ministries from having a role in defence procurement afterwards.

CGAI Fellow Gavin Liddy was just as pessimistic about the value of creating DPC when so many defence procurements are underway. If the government wants “to do one single thing to delay the procurement agenda in the next five to seven years,” then they should instruct defence bureaucrats to create the DPC, Liddy concluded. “Nothing would divert their attention more than doing that.”