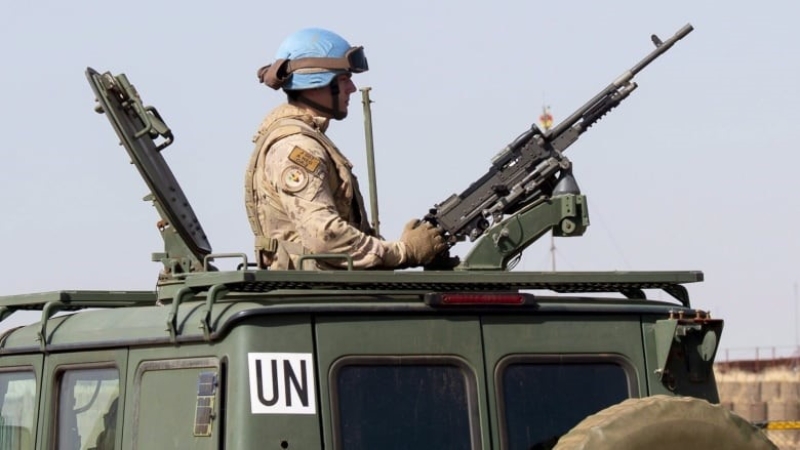 In order to know what most of the major parties think about the uncertain state of the world, and Canada's place in it, you have to dig — really dig — to find it.

The ideas, solutions and proposals around security and defence from the Liberals, New Democrats and the Green Party  are buried, in some cases, at the very back of their platform documents. The Conservatives issued a policy statement last spring but have yet to state their campaign platform.

And that — along with the dearth of debate about the turbulence beyond the country's borders — has alarmed defence policy experts who say now is not the time for politics as usual.

"This is the time we need the clearest, most strategic thinking since the end of the Second World War, in terms of how we do Canadian security," said Rob Huebert, a defence expert at the University of Calgary. "It is not an exaggeration to say we are on the cusp of the most dangerous geopolitical environment we've seen in our lifetime."

The rise of authoritarianism throughout the globe, notably in China and Russia, and the undermining of Western democracies through a variety of circumstances has increased the likelihood of conflict in the eyes of many experts.

The retreat of the United States from its traditional role in the globe has enormous consequences for Canadian domestic policy.

Yet, Huebert said, there is "a total lack of meaningful discussion about the type of direction we need to be taking" by the Liberals and the other parties in the campaign.

The conventional Canadian political calculus is that issues of security and defence policy are not vote-getters and previous elections, with one or two exceptions, have borne out that notion with ballot box issues being defined by either social or pocketbook considerations.

Huebert, however, describes it as a "very disturbing calculation" at this moment in time.

He is not alone in his concern.

"There's a lot going on, but near radio silence," said Dave Perry, a senior analyst at the Canadian Global Affairs Institute. "I'm surprised every political party in this country has been muted on these topics."

The Liberal platform, released Sunday, recycles the title of their marquee defence policy, delivered in 2017 — Strong, Secure and Engaged.

The new campaign document's foreign policy and defence section is titled: "Keeping Canada Strong, Secure and Engaged," and offers up as a pledge to "renew Canada's commitment to peacekeeping efforts," which harkens back to the Liberal election platform in 2015.

"To ensure that Canada continues to make a positive contribution to international peace and security, we will move forward with new investments to support United Nations peacekeeping efforts — with more help to advance the women, peace, and security agenda; support conflict prevention and peacebuilding; and respond to grave human rights abuses," said the Liberal 2019 platform.

The document does not explain what the new investment might look like, but the Liberals say they're committed to spending additional $50 million per year on UN peacekeeping commitments.

However, Walter Dorn, a professor of defence studies at the Canadian Forces College and one of the country's preeminent experts on peacekeeping, said he finds the overall language of the Liberal promise curious.

"Those were the same words used by Liberals in 2015," he said. "So, are they renewing it because they haven't done it in the last four years?"

Dorn said the Liberal government, for a variety of reasons, did not get substantially engaged in peacekeeping during its mandate. It made a number of splashy commitments at an international meeting in Vancouver in 2017, but only delivered a year-long deployment of helicopters to Mali and the more recent secondment of a C-130J Hercules transport for United Nations operations in Africa.

"I hope they can learn from their first term," said Dorn. "Their performance is going to have to be much better if they're going to renew Canada's commitment to peacekeeping and secure a seat on the [UN] Security Council."

He also noted the "average number" of uniform personnel deployed in UN peacekeeping missions under the Liberals was lower than during the former Conservative government era.

There's a promise in the Liberal platform to focus international military training activities to include instruction for other countries on how to respond to "disasters due to climate change."

The NDP's platform, released weeks ago, also leans heavily on peacekeeping, but also promises to work toward nuclear disarmament.

The Green Party makes a similar pledge, but also nods tentatively toward the instability beyond our borders.

Last spring, the Conservatives released a detailed foreign and defence policy statement that promised to buy new submarines, join the U.S. ballistic missile defence program and expand the current military mission in Ukraine. But how much of that will make it into the party's campaign platform is unclear. It is expected to be unveiled soon.

The Liberal platform pays specific attention to the Arctic, but within a foreign policy context promising to "strengthen continental defence" and in the North, moving "forward with better developed surveillance and rapid response capabilities."

Huebert was left scratching his head.

"That blurs together so many talking points, it creates a sense of nothingness," he said.

There is no mention of NORAD modernization, including the planned replacement of the North Warning System chain of radar stations, a cost-shared endeavour with the United States that some experts have estimated could cost up to $11 billion (with Canadian taxpayers on the hook for 40 per cent or roughly $5 billion of that bill.)

Huebert said, when the Liberals talk about "rapid response capabilities," they're referring to better search and rescue coverage in the North, something he said will become a necessity as more and more regions become ice-free in the summer.

"Problem is: We just don't know what they're talking about," he said.

A Liberal campaign spokeswoman said the party understands how crucial it is to support the Canadian military and pointed to the government's defence policy as well as all of the social improvements that have been made for serving members.

"Our platform lays out our vision for moving our country forward and how we plan to build on the progress we have made over the past four years," said Eleanore Catenaro.

Canada supported the UN with "real capabilities," she said, adding that Prime Minister Justin Trudeau addressed the uncertainty in the world in a foreign policy speech at the end of August.

That caught the attention of Perry who said the promise was likely red-circled by officials at the Department of National Defence.

Few Canadians realize that the military is home to the largest intelligence organization in the federal government, in terms of sheer numbers.

Precise figures are hard to establish, but the defence intelligence establishment is believed to be the country's second-best-funded intelligence organization

The National Security and Intelligence Committee of Parliamentarians, earlier this year, signalled it wanted to see the military's intelligence branch put on a tighter legislative leash, similar to legal constraints on civilian spy agencies.

The committee recommended the Liberal government think seriously about drafting specific laws to govern how and under what circumstances military intelligence missions can take place.

The Liberal platform promises to create a specific defence procurement agency, which is curious in the sense that a series of government ministers and senior officials have lauded how well military procurement has been going since the Liberals came to power.

"There is a bit of a disconnect here," said Perry. "The message [with the platform promise] is that you're not happy with the way procurement has gone and you want it to go differently, better or make some substantive change."