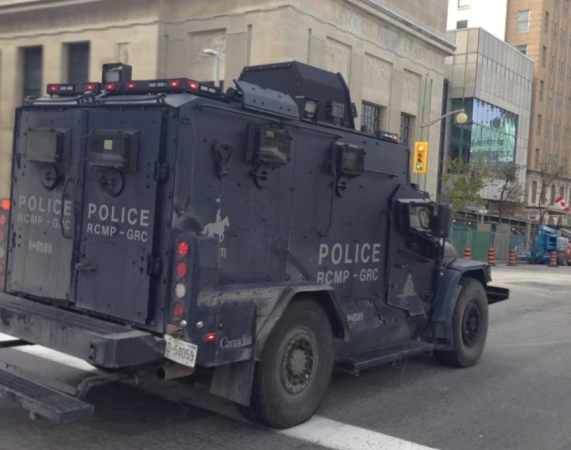 The RCMP is planning to add up to two new “Counter Assault Tactical Vehicles” to its arsenal, worrying critics who say it is a waste of taxpayer money and represents a growing militarization in policing in Canada.

The vehicles the RCMP plans to buy are “light-weight high mobility” armoured vehicles to be operated “primarily in urban areas,” according to procurement documents. The vehicles are to “discretely blend into public settings, and provide protection against small arms while remaining highly maneuverable.”

A request for industry feedback was published in late April. A contract is scheduled to be awarded in February 2021 with final delivery for summer 2023.

The purchase would add to the RCMP’s stock of armoured vehicles that include 18 “Tactical Armoured Vehicles” owned since 2012 and two Cougar vehicles donated by the Department of National Defence in 2010.

These vehicles are intended to shield police officers in so-called “critical incidents,” such as armed standoffs, hostage takings and search and rescue missions.

The purchase of armoured vehicles by police in Canada has come under increasing scrutiny in wake of new protests over anti-Black racism and police violence. Halifax city council recently cancelled the purchase of an armoured tactical vehicle for its municipal police and re-allocated the $368,000 it planned to spend to the city’s diversity office and for anti-racism initiatives.

Critics questioned the RCMP’s plans to purchase the new vehicles.

“It shows police and politicians are failing to listen to what Canadians are saying about defunding police,” said Kevin Walby, associate professor at the University of Winnipeg’s department of criminal justice.

“Each time the RCMP or other police agencies do something like buy more technology, it simply provides further evidence that police are archaic institutions that are non-responsive to real public needs and calls for justice.”

“It speaks to the shift away in our law enforcement, from keeping the peace as peace officers, to an extension of a paramilitary,” he said. “It’s a bleeding of responsibilities between the military industrial complex and local policing.”

The existing fleet includes 18 vehicles delivered by Navistar Defence Canada in 2012 and manufactured in Mississippi. The contract was worth $15.2 million, with the cost to buy each vehicle more than $800,000.

The vehicles are essentially armoured personnel carriers refitted for civilian police. Similar vehicles were used in the Afghanistan conflict by the British military, Navistar said in 2012.

The RCMP was unable to confirm the possession of such vehicles prior to deadline last Friday. Earlier last week, when asked by iPolitics for a list of all armoured, tactical and “military-style” vehicles, a spokesperson cited “operational and security reasons” in refusing to disclose the items. iPolitics had initially asked on June 4 for a list of all RCMP vehicles excluding core vehicles such as sedans, SUVs, ATVs and motorbikes.

In 2014, the National Post reported that the RCMP’s policy requires armoured vehicles to be used by emergency response team members only during critical incidents and not for crowd control. The vehicles can protect against bullets and explosives and carry a full tactical squad. They include gun ports, sentry hatches and a protected observation station.

Walby, who has researched tactical teams in Canadian policing, said armoured vehicles are primarily used by police in active shooter situations and for serving high-risk warrants, but he does not believe there are enough circumstances to justify having them.

“It’s not used for crowd control. It’s not driven around as part of patrol services either. It’s really used for the tactical team,” she said.

Campbell said there are “many factors that come into play” when weighing whether armoured vehicles should be used by civilian law enforcement and are representative of police militarization. Ultimately, she sees them as a “tool” for police that must be handled with care.

“The fact is, weapons and things like armoured vehicles are a part of how officers do their work,” she said. “If there’s trust in the police force, there’s trust in how they use this equipment — and not abuse it.”

Five RCMP armoured vehicles were deployed during the 2014 Moncton shooting that left three Mounties dead. The vehicles were also on scene during the 2014 Parliament Hill shooting. In May, an armoured vehicle was used in a drug-related search in Selkirk, Man., an operation that led to the arrest of two people and the seizure of one sawed-off shotgun, ammunition and drugs.

On June 15, an RCMP armoured vehicle and tactical team were deployed in response to a “mental health call” in Alberta Beach, Alta.

The vehicles can also sometimes be found in local parades and public events. Many local law enforcement in Canada own armoured vehicles. In one case, in Saint John, a private company donated an armoured vehicle to municipal police.

“We’ve really got to look at what are the issues here, and do we need tanks to resolve them,” she said.

Palmater added that it’s often Indigenous peoples who face militarized responses from the RCMP, ones that may involve the deployment of heavily armed officers, helicopters and drones. She cited the January protests on Wet’suwet’en territory as an example.

Green said “over-investments in the militarization of police come at the expense of our ability to invest in the social determinants of health and the basic quality of life for people living in Canada.”

Sent a series of questions last week, including why more armoured vehicles were needed by the RCMP, a spokesperson for Public Safety Minister Bill Blair declined to comment, instead directing iPolitics to the agency stating such questions were operational in nature.

With files from Kirsten Smith