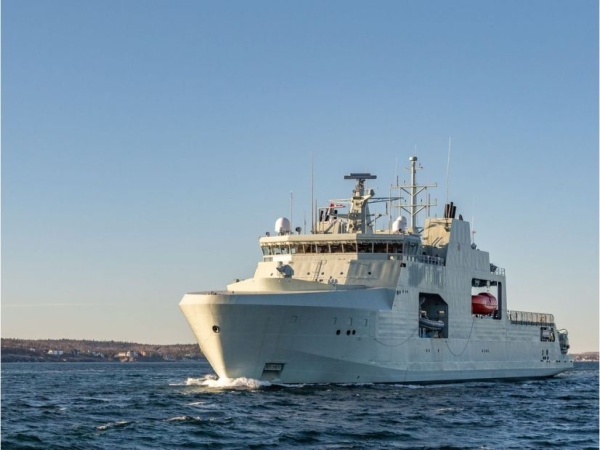 Irving is receiving $58 million from taxpayers to make what the federal government calls minimal changes to an existing ship design so it can be used by the Canadian Coast Guard.

Irving is in the midst of building a fleet of six Arctic and Offshore Patrol Ships (AOPS) for the Royal Canadian Navy and will add two more in the production line for the coast guard. The addition of two ships for the coast guard, announced by the federal government in May, was supposed to be cost-effective as the design of the vessel was completed and the ships were in the process of being built.

But documents recently tabled in Parliament show the government entered into a $58-million contract with Irving for engineering design work on the AOPS that would ensure the coast guard’s vessels “can meet regulatory and operational requirements.”

The coast guard has determined that only minimal modifications are required to the ships to meet its needs as well as any regulatory requirements, according to documents provided to Parliament as the result of a question from Conservative MP Lianne Rood.

“The modifications have been assessed as minimal as none of the identified modifications will impact major elements of the AOPS design and construction,” Bernadette Jordan, the minister of Fisheries, Oceans, and the Canadian Coast Guard, stated in her written response.

But critics are questioning why taxpayers are spending $58 million if the changes are so limited.

“That’s a very expensive tweak,” said Aaron Wudrick, the federal director of the Canadian Taxpayers Federation. “We’d like see some clarity from the government on what could possibly justify such an increase in the price tag.”

Each AOPS is estimated to cost around $400 million. The coast guard originally looked at the AOPS in 2017-2018 but decided against acquiring the ship, industry representatives noted.

But the Liberal government announced in May 2019 that two AOPS would be bought for the coast guard. One of the benefits of the purchase is to prevent layoffs at Irving as there is expected to be a gap between when the shipyard finishes the navy’s AOPS and when it starts working on replacements for the navy’s frigates.

Tom Ormsby, director of communications for Irving, said the first step for the firm is to fully review the AOPS design and then confirm any modifications that are needed to be made for the coast guard.

“Once modifications have been agreed to, these changes must then be worked through and implemented into the design,” he noted. “While not making major changes that a first-in-class design would require, the Canadian Coast Guard has a different and critical mission, including the need for scientific laboratories for sampling and research, so each vessel is being tailored to suit the Canadian Coast Guard’s unique and important role.”

The government only pays for actual costs incurred, he added.

Irving will also receive an additional $18.8 million to purchase some initial equipment for the vessels as well as reimbursement for project management.

The contract to Irving on the design changes was signed Nov. 1, 2019 and is to end March 31, 2021. Areas of change include modifications to the bridge layout and accommodations to meet Transport Canada requirements for a non-military crew, as well as changes to some areas to accommodate coast guard equipment and modifications to the deck, Jordan noted in her response to Parliament. The main portions of the ship, including the hull and propulsion systems, will remain unchanged, she added.

The AOPS program was launched by the Conservative government with a minimum of five ships for the navy. The Liberal government approved the construction of a sixth AOPS for the navy and two for the coast guard

But retired Liberal senator Colin Kenny, who served on the Senate defence committee, questions the value of the AOPS for either the navy or coast guard. Kenny noted he is also concerned about the engineering contract. “These changes shouldn’t cost $58 million,” Kenny said. “I think it’s questionable as to why we are even buying these ships.”

In 2017 the Senate Defence Committee raised concerns about the capabilities of the AOPS.

Among the issues identified by the committee was the slow speed of the AOPS and its limited ability to operate in ice-covered waters. “These limitations are troubling and raise the question of whether the taxpayers are receiving value for the monies spent,” the Senate report said.

The Department of National Defence expects the delivery of the first AOPS by the end of March although it acknowledges there is a possibility that may not happen. The delivery of the vessel has already been delayed a number of times.

The navy expects its last AOPS to be delivered by 2024. After the navy vessels are built, construction will begin on the AOPS for the coast guard, the federal government has said.