With billions of dollars at stake, all parties promise to fix defence purchases 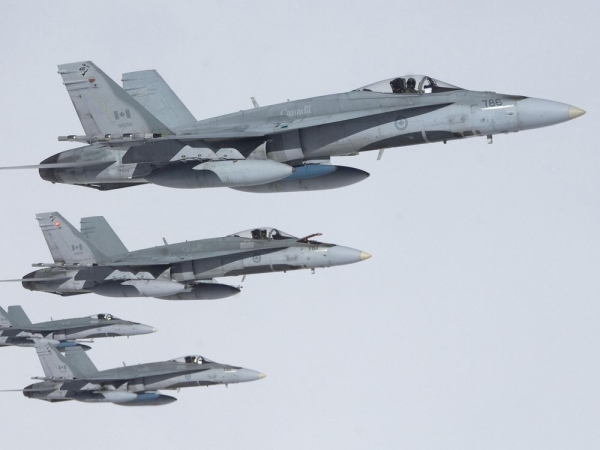 Every election, would-be prime ministers promise to cancel bad military purchases or processes, hurry along good ones, fix the mess once and for all

OTTAWA — The seemingly endless effort to replace Canada’s CF-18s fighter jets passed a tiny milestone Friday: fighter-jet makers participating in the $19-billion competition were required to explain how they planned to make their aircraft compliant with U.S. intelligence systems.

For nearly a decade, Canadians have been inundated with talk of fighter jets without Canada ever buying them, an ever-worsening symbol of the failures of Canada’s military procurement system.

Every election, would-be prime ministers promise to cancel bad purchases or processes, hurry along good ones, fix the mess once and for all.

Conservative Leader Andrew Scheer this week promised to “de-politicize” military procurement with new oversight bodies in cabinet and the Privy Council Office while working toward multi-partisan consensus on procurement projects in Parliament.

The Liberals promise to establish a new agency called Defence Procurement Canada, which suggests taking the entire function away from the four departments that now share responsibility for buying military kit.

The New Democrats and Greens promise, without detail, that they will ensure Canada’s military gets the equipment it needs.

The origins of what we face today can be traced back to the end of the Cold War when Canada and its allies began to cut defence spending after a decades-long arms race with the Soviet Union.

“We deferred purchasing new fighter planes and did the same thing with our frigate fleet,” says David Perry, vice-president of the Canadian Global Affairs Institute and one of Canada’s foremost experts on defence spending and procurement.

“We just kicked the can down the road on fixed-wing search-and-rescue aircraft. There was a bunch of other projects that fit the same vein.”

The military had to use equipment for years longer than it was supposed to and the Department of National Defence lost most of its procurement experts.

But in the mid-2000s, the Forces’ equipment problems were revealed in Kandahar: the military lacked transport aircraft to resupply its Afghanistan mission, artillery and tanks to support troops on the ground and helicopters to move them around.

Ottawa rushed into gear, purchasing transport planes, howitzers, helicopters and tanks in short order — in most cases without competitions. New equipment flooded in but there were some big failures, starting with accusations defence officials rigged the requirements for a new search-and-rescue plane to select a specific U.S. plane.

There was also a failed effort to buy new supply ships for the navy and, most explosively, a plan to buy new fighter jets, Lockheed Martin’s F-35s, without a competition.

In 2012, auditor general Michael Ferguson blasted the Defence Department for failing to communicate the stealth fighter’s risks, including escalating costs and schedule delays, to Parliament and decision-makers.

Dan Ross, who was the department’s head of military procurement at the time, would later say defence officials had all the information and were willing to share it — the Harper government just wouldn’t let them.

Either way, the public’s confidence in the system and the government’s ability to manage it were shaken. The F-35 purchase was scrapped. The Tories imposed new constraints to keep costs under control and ensure Canadian industry and communities benefit from defence contracts.

That recalibration imposed a fundamental tension on the system: the need to get the best equipment possible, with the most benefit to the economy or local industry, at the lowest cost. Every big procurement is partly about the military’s needs and partly about national industrial policy — and, that means, partly about politics.

Most procurements are still completed with minimal fuss. The problems largely lie with big, once-in-a-lifetime contracts like fighters and warships that are worth billions of dollars and are not only essential for the military to operate, but have the potential to benefit Canadian businesses and communities for years. The ones that involve billions of public dollars.

“You’re trying to get the best bang for the buck for as little buck as possible,” says Queen’s University professor Kim Nossal, who wrote a book entitled “Charlie Foxtrot: Fixing Defence Procurement in Canada” in 2016.

“The one comforting thing is that very few countries have got the balance right. All industrial countries, all of our allies, faces these kinds of pressures. They worry about jobs and costs and capability.”

Efforts to combine the three competing priorities can lead to bickering among federal departments, lawsuits from companies and politicians sticking their fingers in things.

Seconds after saying he would de-politicize the military procurement system this week, Scheer promised to negotiate the purchase of an interim naval supply ship from Quebec’s Chantier Davie shipyard, which lobbied the Liberal government for years to ink such a contract without success.

Davie is one of Canada’s big players in shipbuilding — and it’s in much-contested political territory just outside Quebec City.

Alan Williams, who was the Defence Department’s head of procurement from 1999 to 2005 and now advises companies on procurement matters, compares Scheer’s promise on Davie to Justin Trudeau’s promise in 2015 not to buy the F-35.

That’s because while a government can decide to purchase a piece of military equipment, procurement laws — and Canada’s international trade obligations — forbid it from choosing or excluding a specific product or supplier except under extreme circumstances.

Upon taking office, the Liberals twisted themselves in pretzels to get around the legal implications of their promise.

That twisting led to a plan to buy Super Hornets from a competing vendor. When that fell through, four years passed before an actual competition was launched — with the F-35 now one of three planes still in contention. In the meantime, the CF-18s will fly until 2032, reinforced with second-hand Australian F-18s to buy time.