To keep up with our competitors, America must boost shipbuilding 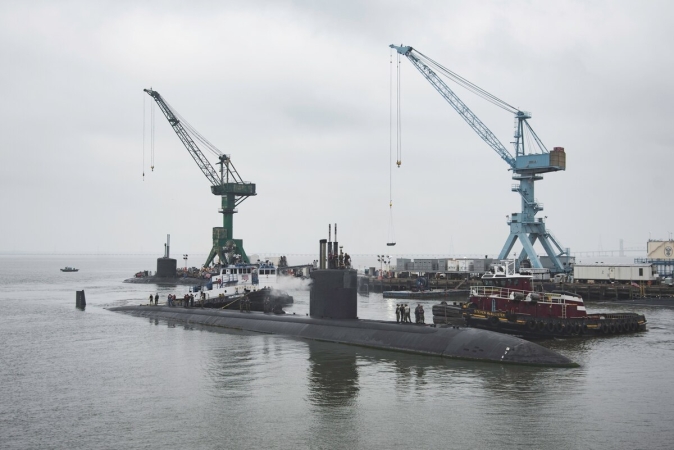 Right now, the world is more dangerous than any time in my lifetime. The United States faces five major threats: China, Russia, Iran, North Korea and terrorism. We face those threats across five domains: air, land, sea, cyberspace and space.

The U.S. Navy is one of the most effective tools we as a country have to maintain peace and stability around the world. Today, however, the Navy is in danger of being surpassed in capability by our near-peer competitors. On top of that, our competitors are becoming even more brazen in their attempts to challenge our Navy every day.

To address this, the 2018 National Defense Authorization Act called for a 355-ship Navy to be built as soon as possible. This effort is extremely expensive: $31 billion per year for 30 years. This can’t be funded by new debt. We must reallocate resources to fund this priority.

It is unclear at this time whether we will be able to achieve this goal, however, because Washington politicians have failed to provide consistent funding to our shipbuilding enterprise over the years.

The last two Democratic presidents reduced military spending by 25 percent. Presidents Bill Clinton and Barack Obama did it. Also, since 1975, Congress has only funded the government on time on four occasions due to our broken budget process. As a result, Congress forces the military in most years to operate under continuing resolutions, which further restricts the Navy’s efforts to rebuild.

These shortsighted decisions by Washington have had draconian effects on our military readiness. They have decimated our industrial supplier base and severely damaged critical supply chains.

This means that, today, many shipbuilding components have just one U.S.-based supplier, and others are entirely outsourced to other countries.

This is one of the reasons why it is doubtful that we can reach 355 ships unless major changes are made immediately. If we don’t strengthen our industrial supplier base, there is simply no way to scale up ship production and maintenance capabilities to meet the requirements of a 355-ship fleet.

The Department of Defense has not yet released this year’s 30-year shipbuilding plan as required by law, and time is running out to reach the Navy’s most recent projection of a 355-ship fleet by 2034.

However, even if the Department of Defense has a solid, achievable plan to only reach 355 ships, I am skeptical that it will be enough. I am skeptical because America’s biggest long-term challenge, China, is already running laps around us on shipbuilding.

On top of that, because of the range restrictions in the Intermediate-Range Nuclear Forces Treaty, which just ended in 2019, China has surpassed, or “out-sticked,” us in some missile capabilities as well.

There are several steps we can take to respond to these developments. For starters, we need to place greater emphasis on funding our shipbuilding enterprise. Also, we need to rebuild our industrial supply chains through consistent, robust funding and by eliminating continuing resolutions.

This year’s NDAA takes critical steps to ensure we can keep up with our near-peer competitors and keep our country safe. It authorizes an increase of more than $1 billion for the construction of new submarines, destroyers and amphibious dock ships. It invests hundreds of millions of dollars to support our industrial supplier base.

However, more work remains to be done in the coming years. We need to dramatically build up our Navy beyond 355 ships to ensure that the American-led free world can continue.

President Teddy Roosevelt once said that “a good Navy is not a provocation to war. It is the surest guarantee of peace.” If we don’t continue ramping up our shipbuilding enterprise right now, the world that we will be passing on to our children and grandchildren will only continue to grow more dangerous.

Sen. David Perdue, R-Ga., is the chairman of the Seapower Subcommittee of the Senate Armed Services Committee.