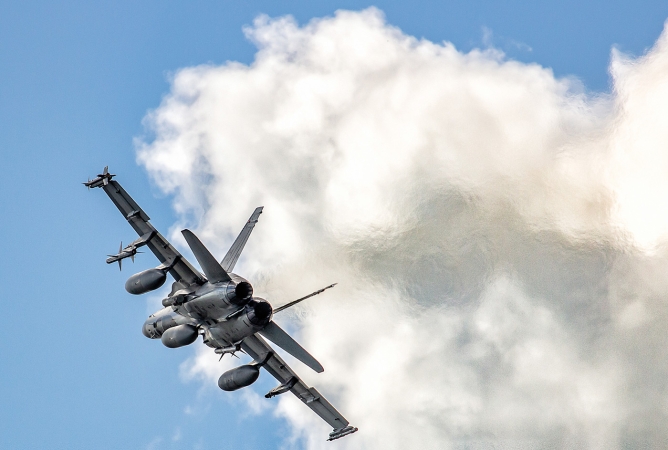 The path towards procuring a replacement fighter for the CF-188 Hornet has been one with many twists and turns due to political gamesmanship and strategic business marketing, causing much public misunderstanding.

This short article aims to put a few things into perspective as the competitors complete their analysis and response to the government’s request for proposal (RFP) issued July 23, 2019, for the Future Fighter Capability Project (FFCP).

The Dassault Rafale and Airbus Eurofighter Typhoon were both pulled from consideration, with company officials citing “that NORAD [North American Aerospace Defense Command] security requirements continue to place too significant of a cost on platforms whose manufacture and repair chains sit outside the United States-Canada 2-EYES community.”

Given that the Canadian government identified the first two principal roles of the Canadian Armed Forces as ensuring Canadian sovereignty and the defence of North America, the requirement to be fully functional and integral within NORAD is mandatory.

The reality today is that fighters are not simply weapons platforms, but flying computers that also function as airborne sensors that are designed to be integrated into command and control computer networks. Thus, the challenge for non-American manufacturers is to overcome both sensitive commercial and U.S. national security concerns when they are required to integrate and support U.S. information-sharing equipment in their platforms.

A second reason given for Airbus’s departure was the eleventh-hour modification to the RFP that relaxed the expected industrial technological benefits (ITB) obligations. To attract more than three suppliers and ensure a competition, the government originally stuck to its standing ITB policy of “requiring the winning supplier to make investments in Canada equal to the value of the contract.” However, this effectively eliminated the F-35 due to the Joint Strike Fighter (JSF) Program agreement – signed by Canada – that forbade such a demand. To provide latitude to all bidders, the final RFP was modified into a two-phased proposal to allow non-American companies to address 2/5-EYES challenges up front, while also applying rated criteria for economic offset potential of stated ITB requirements, to keep the F-35 within the bidding process. Additionally, five per cent was shifted from cost to economic criteria to compensate for changes in the original draft ITB policy. The proposals will now be assessed on 60 per cent technical merit, 20 per cent cost and 20 per cent economic benefits.

Saab’s approach with the Gripen E bid in Canada follows this successful formula of maximizing national economic benefits with an economical product; however, Saab also faces the challenges that Airbus determined to be too difficult to overcome. Additionally, the Gripen E is still in development; its first production flight occurred on Aug. 26, 2019, meaning issues of proven performance and systems maturation need to be factored in during bid evaluation. According to the firm, this first fighter will be used as a test aircraft in a joint Swedish/Brazilian test program, the only two customers for the Gripen E to date.

Given that the Eurofighter bid was sponsored by the U.K. government, a member of the 5-EYES community that decided it could not meet the information-sharing requirements, Saab will need to be innovative and cost-conscious in its proposal if it is to surmount this mission-critical criteria.

As for the Super Hornet, Boeing promised to invest $18 billion in ITBs under the failed 2017 purchase agreement for 18 fighters, and it is anticipated that the company will follow its established approach to investing in Canada as per previous ITB commitments.

Concern over the so-called Boeing Clause, “to allow only companies that it deems ‘trusted partners’ to bid on major capital programs,” has faded away and Boeing is confident that it can mount a competitive bid,  particularly now that the U.S. Navy’s (USN) commitment to future purchases will keep the production line open until 2033.

By incorporating leading-edge technology into the Block III to meet adversarial advances, Boeing has ensured the Super Hornet will meet Canadian requirements. Although still in development as well, a major question for government decision-makers has to do with sustainability. At present, only the USN and Kuwait will operate the Super Hornet Block III, while Australia has plans to upgrade their Block II version. As Australia expects to retire its fleet in the early 2040s and the USN in 2045, the challenge for Boeing will be in meeting the stated lifecycle expectancy of Canada’s future fighter in a cost-effective manner.

Since 2015, the much-maligned F-35 has proven itself in combat and counts Australia, Belgium, Denmark, Israel, Italy, Japan, the Netherlands, Norway, Poland, South Korea, the United Kingdom, and the three U.S. services as customers. As the only fifth generation fighter, it contains technological advances that are designed into the aircraft and cannot be replicated in fourth generation platforms.

The overall architectural concept regards the F-35 as more than just a weapons platform, but also as a forward sensor that is fully integrated into the developing multi-domain command and control system. Initial airframe costs have been significantly reduced and early sustainment issues are being resolved; however, the F-35 remains the most costly platform to own and operate at the moment.

With a projected lifetime production run of over 4,000 fighters, lifecycle support is guaranteed, and Canadian industry stands to gain substantially from Canada’s early investment in the co-operative JSF Program. However, according to reports, manufacturers will lose points in the ITB element formula scoring system if they do not make a 100 per cent commitment to the contract value, which Lockheed-Martin is prohibited from doing by JSF contractual agreement.

Interestingly, all remaining competitors can lay claim to being Arctic platforms. Canada has already proven the F/A-18’s credentials in the high North, the U.S. will base two combat F-35 squadrons in Alaska, and Sweden has developed the Gripen with Arctic operations in mind.

The issue of one versus two engines has never been a significant issue for Arctic operations except in Canada. Originally, two engines was one of the many discriminators used in choosing the F/A-18 over the F-16 in 1979. Recently, the Standing Committee on National Defence’s shaping of the narrative in 2016 to promote the sole-source purchase of the Super Hornet reintroduced the idea that operations in the Arctic demanded two engines.

As with commercial aviation where transatlantic flight once required four-engine passenger planes, the advancements in engine technology have led to standard two-engine models today. Engine reliability is not a concern with any of the competing fighters. However, operations in Canada’s Arctic are unique and risky in an inhospitable region that is 11 times the size of Sweden. Other discriminators, such as continuous communications and tracking, become equally or more important to survival.

One of the unfortunate aspects of American F-35 global marketing efforts with respect to the FFCP is the issue of stealth technology. Although the idea of penetrating, first strike operations sells well in the U.S., stealth is a much maligned and misappropriated concept in Canada.

Stealth technology is all about maximizing self-protection and increasing survivability by disrupting the ‘kill-chain’ through low observability. This concept is no different from the tactical advantages that I used while flying the CF-104 in Germany during the Cold War. The Starfighter had a one-square-metre cross-section nose-on, making the adversary’s initial radar detection difficult and target acquisition and identification questionable, delaying force commitment to the target. This complicated the decision and order to attack the target, and finally upon weapons release, the low radar cross-section shrunk the available radar weapons envelope needed for destruction of the fighter. The CF-104’s speed significantly exacerbated the adversary’s kill-chain difficulties.

The advent of artificial intelligence (AI) will significantly decrease ambiguity and decision-making time in the near future. Whether built into the design or strapped on later, some form of self-protection is required to protect the pilot and the fighter asset that will either be defending Canadian territory or operate in foreign contested airspace when the government commits its fighter force.

The question is one of application and the cost effectiveness of self-protection measures used by each platform and how they are expressed in the bid proposal.

Costing is a nebulous exercise outside evaluation of the final bids due to the many variables. Although airframe costs are most often thrown around, the government must consider the airframe, operating, infrastructure, sustainment and other related costs as a package, balanced against the capability being purchased.

A good example of the intricacies involves the way the fighter fleet is bought. The Super Hornet must be purchased through the U.S. Foreign Military Sales (FMS) process, where the U.S. government acts as the broker. Generally, a 30 per cent mark-up is charged for research and development (R&D) and administrative fees.

In the case of the F-35, as a JSF partner, these costs are reduced for Canada through common funding. The costs for R&D have already been shared by the membership pool, and partners pay the same price for the weapons system as the U.S. services.

Each of the competitors is being asked to provide 88 fighter aircraft within the $19 billion funding envelope and the old adage of “you get what you pay for” is very applicable.

Each of these platforms brings a different level of current and future combat capability that needs to be judiciously weighed. If the fighter is to reach the government’s goal of flying until 2060, each needs to be flexible and adaptative to evolving technology. More significantly, 70 per cent of lifecycle costs are in sustainment and therefore the fighter chosen must be cost-effectively supported for the next 40 years.

In the lead-up to the RFP, it has been evident that national security factors have been competing with economic benefit interests. With the election this fall, the next government (whatever form this takes) will no doubt want to review the project and put its own stamp of approval on the process that it has inherited.

Hopefully this will not further delay the decision on the replacement of the CF-188 fleet and the Royal Canadian Air Force will finally be able to move ahead with the best fighter aircraft Canadians can provide to the women and men who are putting their lives in harm’s way.