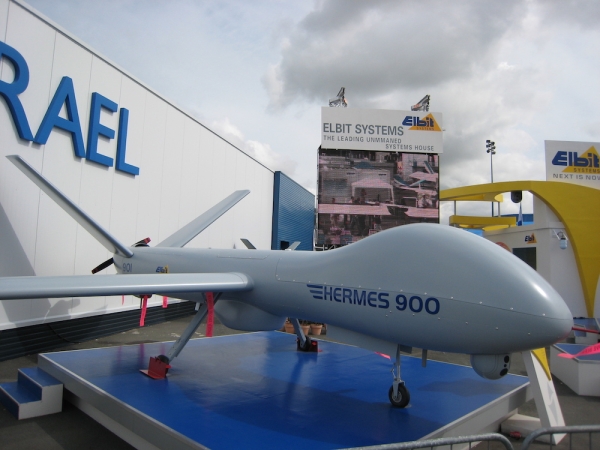 After years of experimentation and analysis, the government of Canada has procured a new Hermes 900 StarLiner from Israeli UAV manufacturer Elbit Systems that can withstand and patrol its massive, inhospitable Arctic territory.

Extreme weather with high winds and low temperatures, limited and unreliable satellite communication and navigation, and continuous darkness during the winter months make controlling UAVs in the Arctic especially challenging. Combined with a lack of ground infrastructure, both line of sight and satellite control of a UAV can become nearly impossible.

The hope is that the Starliner can conquer these harsh Arctic conditions. This version of Elbit’s Medium Altitude Long Endurance (MALE) military UAV is fully certified to operate in civilian airspace and will take off from and land on civilian airfields. It will perform myriad operations to reduce harmful environmental impacts, including detection of oil pollution and wildlife surveying, as well as ice patrol and reconnaissance. It will also support search and rescue, humanitarian efforts and illegal fishing enforcement, and will aid the development and regulation of Canada’s drone industry.

The $36.16 million contract includes communication links, ground control stations, sensor packages, training and the optional purchase of spare parts. The Starliner is expected to be delivered by December 2022, but procurement has been years in the making.

Timothy Choi, a maritime strategy expert and Fellow at the Canadian Global Affairs Institute, has said the Canadian government had limited options in its search for a proven maritime drone with Arctic capabilities.

“Large maritime surveillance drones—that is, ones equipped with downward-looking radar and AIS [automatic identification system] receivers to detect shipping—have not been as prevalent in the global drone market as their land-centric counterparts,” Choi told the website Eye On The Arctic. “Of these, there are even fewer that have been tested in Arctic conditions.”

The model Canada is acquiring has been undergoing operational trials in Iceland via the European Maritime Safety Agency since summer 2019.

At 1.6 tons, the StarLiner includes detect and avoid (DAA) systems, redundant datalinks and an advanced terrain avoidance warning system. Its ability to automatically take off and land in near-zero visibility, and to sustain deicing procedures and direct lightning strikes, makes it ideal for the Arctic’s extreme weather challenges.

According to Canadian officials, the new UAV can operate at up to 72 degrees north latitude and has a range of more than 1,400 nautical miles. It comes equipped with back-up command and control and navigation systems, electrical optical infrared camera, synthetic aperture radar and a mapping camera system.

For now, the majority of Canada’s Arctic surveillance data will continue to come from RADARSAT, the country’s remote sensing earth observation satellite program. But while the satellites can detect emergencies such as an oil spill, their brief visits over the Arctic make it difficult to identify causes and consequences. The same is true for identifying nefarious activities such as illegal dumping and unpermitted fishing.

“The ability of a drone to loiter for long periods of time with higher resolution sensors will help fill this gap,” Choi explained. “Operationally, the new drone will greatly help ‘connect the dots’ when it comes to surveilling Arctic waters and enforcing Canadian regulations.”

While this Hermes version will be used in civilian missions, its acquisition is just one part of Canada’s Arctic Unmanned Aircraft System Initiative, and it will join the country’s National Aerial Surveillance Program’s manned aircraft fleet.

With 75% of Canada’s coastline and 55% of its landmass located in the Arctic, Canada and its main regional rival, Russia, potentially contest for resources and the new shipping routes being created by global warming. Russia is deploying a fleet of dual-use extreme-weather UAVs featuring a GIRSAM alternative navigation system. China, which is talking about a “Polar Silk Road,” also is developing dual-use UAVs optimized for Arctic conditions.