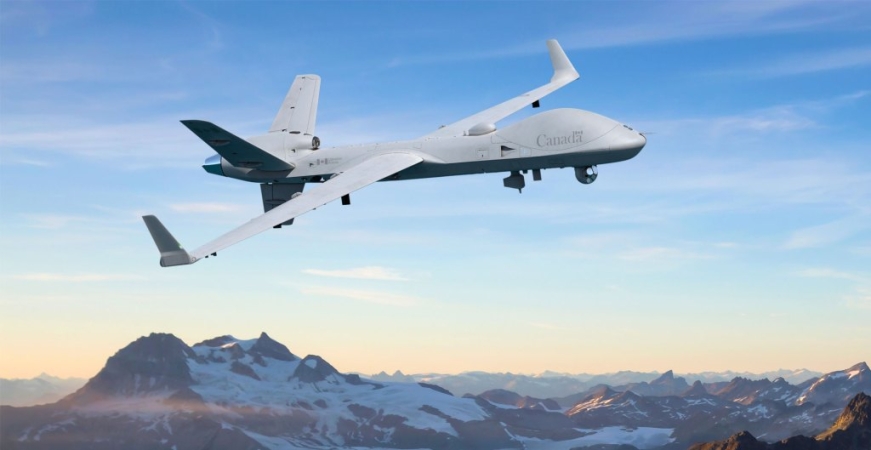 The Canadian government is in discussions with a pair of unmanned aerial vehicle manufacturers to refine requirements for a new fleet of armed medium-altitude, long-endurance drones.  The new aircraft are being acquired through the Remotely Piloted Aircraft Systems (RPAS) project, previously known as the Joint Unmanned Surveillance and Targeting Acquisition System (JUSTAS).

General Atomics has teamed with CAE Canada, MDA, and L3 Wescam to offer the MQ-9B SkyGuardian.  L3 MAS is working with Israel Aerospace Industries to bid the Artemis unmanned aircraft system, which is based on IAI’s Heron TP.

The program officially entered the Refine & Review Requirements phase in July 2019, at which point the government and industry teams began discussions to refine program requirements.  These discussions will help inform a formal Request for Proposals, which is expected to be released in fiscal year 2020/2021 (between April 2020 and March 2021).  A contract is anticipated in fiscal year 2022/2023, barring any delays.  Deliveries could begin in 2024/2025.

Canada’s desire for a new fleet of UAVs surfaced around 20 years ago, but little progress has been made since then.  The Royal Canadian Air Force had been preparing to award a contract to General Atomics for its Predator UAV in 2007, but the program was halted due to concerns about a lack of competition.

At one point, the government outlined a new two-phase approach.  The first phase would include an armed UAV for overland missions.  A second phase would buy a system primarily for maritime surveillance off Canada’s coasts, as well as limited Arctic surveillance.  This plan was scrapped in 2013 and the program went back to the drawing board.  Ultimately, government documents show the Air Force has tried and failed six times since 2005 to acquire a new UAV fleet.

Following the initial delays of the JUSTAS program, Ottawa leased Heron UAVs as an interim solution to fulfill an urgent requirement for additional ISR capabilities in Afghanistan.  The first system was delivered to Canada in October 2008 and deployed to Afghanistan shortly thereafter.  The Herons replaced smaller SPERWER UAVs that were in service since 2003.

The value of the RPAS program has not been announced, and Canada has not specified how many aircraft it will buy.  The government’s Defence Capabilities Blueprint indicates the program will fall within a very broad price range of between CAD1 billion and CAD4.99 billion, one of the preset funding ranges used by the blueprint to categorize programs.