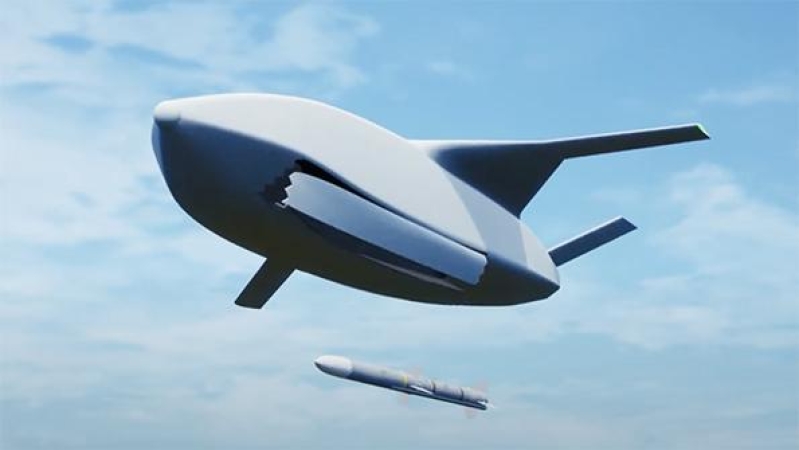 The next combat aircraft to enter the U.S. Air Force inventory will not be a manned sixth-generation fighter or even the Northrop Grumman B-21.

By fiscal 2023, the Air Force expects to deliver the first operational versions of a new unmanned aircraft system (UAS) called Skyborg, a provocative portmanteau blending the medium of flight with the contraction for a cybernetic organism.

The Skyborg family of aircraft is expected to fill an emerging “attritable” category for combat aircraft that blurs the line between a reusable UAS and a single-use cruise missile.

As the aircraft are developed, Skyborg also will serve as the test case of a radical change in acquisition philosophy, with ecosystems of collaborative software coders and aircraft manufacturers replacing the traditional approach with a supply chain defined by a single prime contractor.

The Air Force also plans to manage the Skyborg aircraft differently than other UAS. Although Air Combat Command (ACC) is considering the Skyborg family as a replacement for pre-Block F-16s after 2025 and MQ-9s after 2030, the aircraft is not likely to fit neatly into an existing force structure with dedicated Skyborg squadrons.

“Even though we call Skyborg an attritable aircraft, I think we’ll think of them more like reusable weapons,” says Will Roper, assistant secretary of the Air Force for acquisition, technology and logistics.

The Skyborg is an attritable weapon, which means key components such as the jet engine will be designed with a short service life. Credit: AFRL via YouTube

The Skyborg propulsion systems—including expendable subsonic and supersonic jet engines—will be rated with a fraction of the service life expected of a fully reusable UAS or manned aircraft.

“We’ll do whatever number of takeoffs and landings they’re ‘spec’d’ for, and then we’ll attrit them out of the force as targets and just buy them at a steady rate,” Roper says.

Starting in fiscal 2023, a concept of operations for a formation of four Lockheed Martin F-22s will include Skyborgs as part of the manned aircraft’s load-out.

“I expect that the pilots, depending on the mission, [will] decide: Does the Skyborg return and land with them and then go to fight another day, or is it the end of its life and it’s going to go on a one-way mission?” Roper explains. In some cases, the pilot may decide a target is important enough that it is worth the loss of a Skyborg, even if its service life has not been used up, he adds.

As the concept evolves, a diverse array of Skyborg aircraft designs will likely find roles beyond the air combat community, Roper says.

Skyborg is often presented as the epitome of the “loyal wingman” concept, in which one or multiple UAS are controlled or managed by a manned aircraft to perform a variety of surveillance, support and strike tasks during a mission. But the aircraft also could have the ability to operate independently of a manned aircraft, with the capability to launch and recover hundreds of such systems without the need for runways or even bases.

The Kratos XQ-58A, which achieved first flight in March 2019, is one of several potential members of the Skyborg UAS family. Credit: U.S. Air Force

“If [China and Russia] know that they have to target only tens or even hundreds of ports and airfields, we have simplified their problem,” says ACC chief Gen. Mike Holmes. The new class of attritable aircraft, he says, are designed so that “we can still provide relevant high-tempo combat power to be freed up from a runway.”

If Skyborg is the future, it begins on July 8.

The Air Force Research Laboratory (AFRL) is due on the second Wednesday of this month to award a contract to start developing the first in a family of experimental UAS bearing the name Skyborg.

The AFRL already has a stable of potential concepts. The Kratos XQ-58A Valkyrie, which has flown four times since March 2019, is the most visible example of the AFRL’s Low-Cost Attritable Aircraft Technology platform. Meanwhile, the Low-Cost Attritable Aircraft Platform--Sharing project quietly kept several UAS industry leaders involved in design studies, including Boeing, General Atomics Aeronautical Systems Inc., Lockheed Martin and Northrop Grumman. Each company selected will be awarded a contract with a maximum value of $400 million over a five-year ordering period.

But the core of the Skyborg program is the software; specifically, the military aviation equivalent of the algorithm-fed convolutional neural networks that help driverless cars navigate on city streets.

In announcing Leidos on May 18 as the Skyborg Design Agent (SDA), the AFRL selected the same company that delivered the software “brain” of the Navy’s Sea Hunter unmanned surface vehicle, which navigated from San Diego to Honolulu in 2018. As SDA, Leidos’ role is to deliver a software core that uses artificial intelligence to learn and adapt as the aircraft flies.

The autonomy mission system core—as integrated by Leidos from a combination of industry and government sources—will be inserted into multiple low-cost UAS designed by different companies, with each configured to perform a different mission or set of missions.

That is how the Skyborg program is set up today, but that is not how it started. Roper created the original “Skyborg” term and concept when he led the Strategic Capabilities Office within the Office of the Secretary of Defense in 2012-17. Roper transferred Skyborg to the AFRL, where it was renamed Avatar. A year after taking over Air Force acquisition in 2017, Roper changed the name back to Skyborg and created a program office in October 2018.

In March 2019, Roper revealed the Skyborg concept to a group of reporters a week before the AFRL issued the first request for information to industry about the program. At that time, Skyborg was still organized more traditionally, with plans to select a single contractor to serve as a prime integrator. By early 2020, program officials reorganized Skyborg into modular hardware and software subcomponents built on an open architecture that requires no prime integrator.

As the acquisition strategy has evolved, so has the Air Force’s thinking about how to use the Skyborg family of systems.

“The whole idea was [that] the contested environment is going to be challenging, it’s going to be uncertain, and so it makes the most sense to have something that doesn’t have a pilot in it to go into the battlefield first,” Roper says. “But once you agree that’s a self-evident operational concept, it opens up the door for a lot of nontraditional thinking for the Air Force.”

After a 2-3 year experimental phase, the AFRL plans to deliver an early operational capability in fiscal 2023. Follow-on operational Skyborgs could be funded within the Next-Generation Air Dominance (NGAD) project or through a separate program of record. The Skyborg concept even has links to the Air Force’s architecture for the Advanced Battle-Management System (ABMS). “Attritable-ONE,” which is defined as having “multirole attritable capabilities,” is one of about 30 product lines in the ABMS architecture.

“Skyborg and the AttritableONE teams are closely coordinated for planning and collaboration purposes,” the AFRL informed industry in response to questions about the Skyborg solicitation.

The aircraft supplier must deliver a highly flexible design. Leidos, the design agent, will provide the autonomous mission system that will serve as the pilot, flight control computer and mission systems operator for the aircraft. But the “size, weight, power and cooling details for the Skyborg core autonomy system have not been finalized,” the AFRL told the bidding companies.

“The majority of the system will be software-based and integrate with the sensors onboard the host aircraft,” the AFRL says. “Extensive collaboration between the Skyborg system design agent and the participants in this [contract] is expected.”