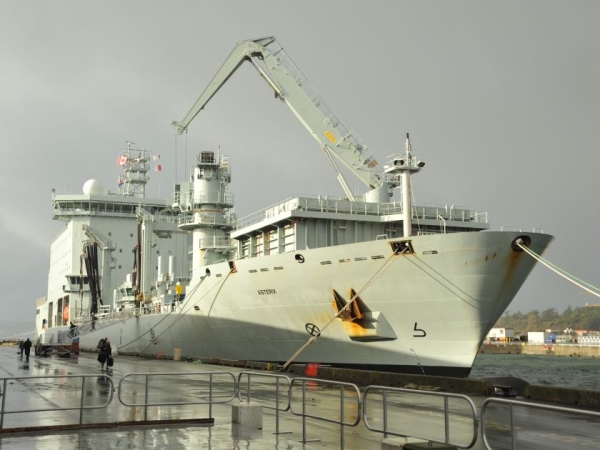 Navamar Inc. of Montreal has received a $12 million contract to provide five “ship-to-shore connector systems” to the Royal Canadian Navy.

The pontoon barges would be used to move supplies to shore from either the MV Asterix replenishment ship or the future Joint Support Ships, reports Esprit de Corps military magazine. The large craft could be used during humanitarian missions or on operations where no dock is available.

The former Protecteur-class replenishment ships also had a landing craft vehicle personnel capability (LCVP), which provided limited support to humanitarian and disaster relief operations, according to the Department of National Defence. “The new sea to shore connectors will be more robust and versatile, and provide a significantly improved capability,” it added in a statement. The connectors will be modular and configurable to adapt to almost any mission, the department noted. They could be used as a temporary jetty anchored to the shoreline or as a large barge to assist in ship maintenance and repair or perform evacuation operations. In terms of cargo capacity, the old LCVP had enough space to transport a couple of pallets of rice bags or 40 people. The new sea to shore connectors will be able to carry thousands of bags of rice, hundreds of personnel, and multiple vehicles, according to the DND.

In other JSS news, Seaspan has awarded Hepburn Engineering Inc. of Toronto, ON, a contract for work on Canada’s new Joint Support Ships. Hepburn will provide four Replenishment Stations for the Joint Support Ships, which will allow the vessels to transfer fuel, fresh water, and solid goods to and from other vessels. These Replenishment-at-Sea (RAS) systems will be fully compatible with NATO standards, allowing the JSS to resupply and refuel Canadian and allied task force ships at sea.