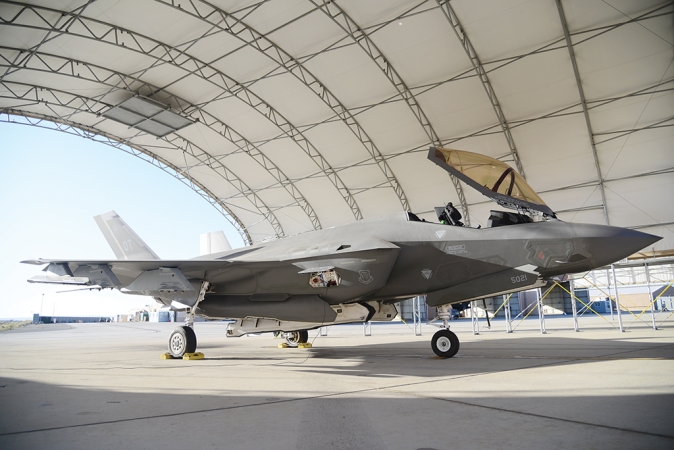 An ongoing legal dispute between the U.S. government and Lockheed Martin over intellectual property (IP) rights in the F-35 program has emerged as the source of a 2.5-year delay in activating a key system required to complete initial operational testing and the full-rate production decision.

Involving the Pentagon’s largest single weapons program ever—and with full-rate production critical to Lockheed’s long-term profitability—the dispute has waylaid progress for both sides. But not only is the matter holding up the program, it may set a precedent for the military’s increasing reliance on software and the government’s desire to reap data-based rewards.

“We still do have concerns,” says U.S. Air Force Lt. Gen. Eric Fick, F-35 program executive officer. “We don’t need all the data, but the data that we need, it’s important that we pursue it.”

“We also have fundamental standards that we need to set down so that it is very, very clear,” adds Ellen Lord, undersecretary of defense for acquisition and sustainment.

The military’s open-air test ranges lack the capacity to fully test the F-35’s advanced capabilities, so the Director, Operational Test and Evaluation (DOT&E) office is relying on the activation of the Joint Simulation Environment (JSE). The JSE creates a synthetic world that allows operational testers to gauge the F-35’s performance in theater-level scenarios, with multiple aircraft flying against an adversary’s full arsenal of fighters, missiles and electronic warfare capabilities.

The JSE was supposed to be activated in late 2017 but now is scheduled to achieve the first-use milestone in July 2020, Robert Behler, the head of DOT&E, told lawmakers Nov. 13 during a House Armed Services subcommittee hearing on F-35 readiness. The DOT&E has completed 91% of open-air missions during the Initial Operational Test & Evaluation phase required to qualify the F-35 for a full-rate production decision, but the testers still need to use the JSE to complete all of the testing.

According to Fick’s testimony, the IP dispute has delayed activation of the JSE. The JSE requires Lockheed to supply the software to enable a function nicknamed “F-35 in a Box,” he says. This is a software module that allows the JSE to virtually replicate each of the F-35’s sensor subsystems, along with the sensor fusion brain embedded in the operational flight program. The government would then add software modules to replicate various threats, including aircraft, weapons and sensors of various adversaries.

A dispute arose because Lockheed asserted an IP claim over nine specific algorithms that were included in the “F-35 in a Box” software package, the general says. The program office responded by bringing in the Defense Contract Audit Agency (DCAA) to review Lockheed’s records. The DCAA’s auditors determined they could not find the proof in Lockheed’s records that the nine algorithms had been developed solely at Lockheed’s expense. Since Lockheed failed to prove its claim, the DCAA determined the nine algorithms belonged to the government.

Lockheed has appealed the DCAA’s decision to the Armed Services Board of Contract Appeals, where it is still being adjudicated, the general told lawmakers.

The dispute over the JSE feeds into a larger source of tension between the government and contractors over IP rights. Lord testified that her office is in the final stages of approving a new, Pentagon-wide policy on preserving the government’s rights to IP in acquisition contracts. The policy will be modeled on an approach adopted late last year by the Army, which requires program managers to establish the government’s IP rights on specific systems up front, rather than treat the issue as an afterthought.

“Before we put together an acquisition strategy, you have to think about what information is critical to a program, particularly in terms of sustainability, so that you’re not always held hostage to the prime on that through the life of the contract and [so] that you can find better cost solutions through a variety of different providers,” she said.

Still, the new approach could challenge the business models of prime contractors and suppliers, who traditionally have eaten costs up front or bid low to win weapons contracts, with the intent of making money in the two-thirds of the life cycle of the program that includes sustainment. At an Aviation Week defense conference years ago, defense executives were asked to address the idea of giving up IP rights to the government and were determined to resist. “No!” yelled one executive in the closed-door gathering.

Industry is not yet behind the emerging Pentagon policy, he indicated during the ComDef 2019 conference in October, because it does not strike the proper “balance,” in industry’s view, to allow it to reap profits while letting the government contract to sustain weapon systems more affordably.

“We think [it] is headed toward the right kind of balance, but I would just encourage that to continue—we’re engaged quite a bit with the department on that,” Luddy said. “We have to find that balance.”

Diana Maurer, director of defense capabilities and management at the Government Accountability Office, noted that her auditing office flagged the IP issue in 2014 and is happy to see the Pentagon make progress on the issue. But the changing nature of warfare systems means the issue will likely only grow. “Weapon systems today are essentially flying or sailing or moving pieces of software, and the intellectual property is an important piece of that.”