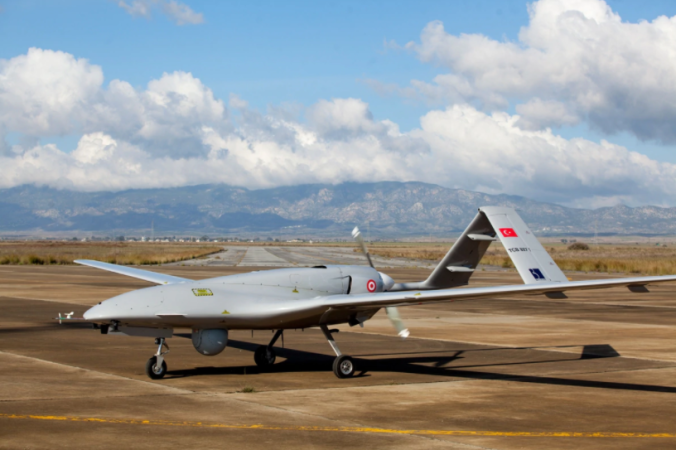 ANKARA, Turkey — The Canadian government’s decision to suspend export of key drone parts to Turkey has once again thrown a spotlight on Turkey’s ongoing efforts to develop a self-sufficient defense industry.

Turkish President Recep Tayyip Erdogan often boasts at party rallies that his governance since 2002 has reduced Turkey’s dependency on foreign weapons systems from 80 percent to 30 percent. There is truth in that, although the actual percentages remain a mystery, mainly due to the difficulty of defining what is truly a local or national system.

Most Turkish “national” systems depend on various degrees of foreign input, often including critical parts only available abroad. The T129, an “indigenous” attack helicopter, is a Turkish variant of the Italian-British AgustaWestland A129 Mangusta chopper. Turkey’s local industry has no engine technology.

The “national” new generation tank Altay is facing major delays, due to the lack of a foreign engine and transmission system. Turkey’s first “indigenous” landing platform dock, the TCG Anadolu, will enter into service next year, but the $1 billion or more ship is being built under license from Spain’s Navantia.

Even Turkey’s biggest success in the past few years, a locally-built drone known as the Bayraktar TB-2, features critical foreign parts — an issue now in the spotlight following Canadian Foreign Minister Francois-Philippe Champagne’s Oct. 5 announcement to suspend export permits of drone technology to Turkey, which is backing Azerbaijan in the recent Azeri-Armenian military conflict.

Champagne issued the pause in exports alongside an order for his ministry to investigate claims that Canadian drone technology is being used in the fighting. The decision followed an announcement by disarmament group Project Ploughshares, which warned the multimillion-dollar exports of high-tech sensors and targeting technology produced by L3Harris WESCAM in Burlington, Ont., are in direct contravention of Canada’s domestic laws and its international obligations under the United Nations Arms Trade Treaty, to which the Trudeau government acceded almost exactly a year ago.

L3Harris WESCAM, the Canadian subsidiary of U.S. defense giant L3Harris, is one of the world’s leading producers and exporters of electro-optical/infra-red (EO/IR) imaging and targeting sensor systems — both of which are featured on the Bayraktar drones.

“These sensors are integral for their ability to conduct drone warfare, which they’ve done increasingly... in the past few years across several conflict zones,” Kelsey Gallagher, a Project Ploughshares researcher, told Radio Canada International. “If the exports of these sensors were completely halted, then Turkey would not have the sensors necessary to conduct modern airstrikes.”

“This [the suspension of Canadian supplies] may cause disruption in the production line,” said one local aerospace analyst, “unless substituted immediately.”

“There may be some other foreign suppliers to be used as a stop-gap solution," the analyst added. "But this is mostly a Western (including Israeli) technology and may not reach Turkish manufacturers due to political reasons.”

Turkey’s top procurement official, however, has a solution. Ismail Demir, president of the defense procurement agency SSB, twitted Oct. 6, the day after the Canadian decision, that Turkey would soon start to mass produce the CATS electro-optical system, to replace the WESCAM technology used in the TB-2 drone.

CATS will be produced by military electronics specialist Aselsan, Turkey’s biggest defense company. Demir said that Aselsan has also begun to work on developing a future version of the CATS system.

Demir also talked up another new indigenous ambition: Project Özgür, or “free” in Turkish. Özgür is part of a broader upgrade effort designed to extend the life of the Turkish F-16 fleet.

Turkey views the F-16 upgrades as a stop-gap solution before it builds its own indigenous fighter, the TF-X. But the TF-X effort has moved at a crawl, with no notable progress in the past few years, due mainly to the lack of an engine to power the planned fighter.