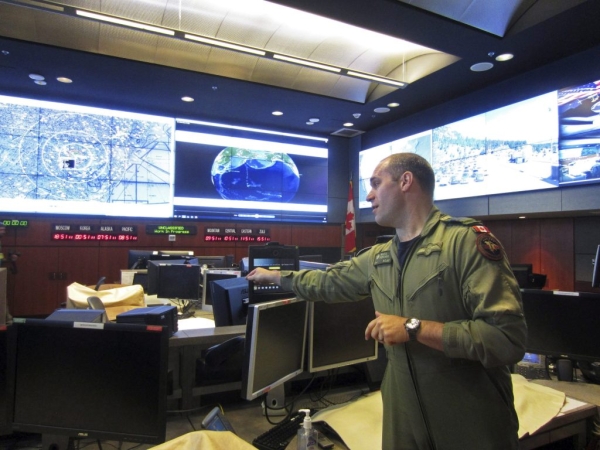 The modernization of the North American Aerospace Defence Command (NORAD) will dominate the agenda of Canada-U.S. defence relations as the Biden administration gears up to repair relations with old allies and face emerging threats from resurgent Russia and ascending China, Canadian defence experts say.

The continued modernization of the binational command created in 1957 was on the agenda of the first phone call between President Joe Biden and Prime Minister Justin Trudeau last month, and during the first calls of Canadiand and U.S. defence ministers, said Andrea Charron, head of the Centre for Defence and Security Studies at the University of Manitoba.

“This is at the highest levels. When the U.S. is concerned about the homeland defence and they feel vulnerable, it’s something that Canada has to take very-very seriously and I think that is what’s happening,” Charron told Eye on the Arctic.

“It opens up the question of whether Canada will participate in missile defence, it’s going to push Canada towards that new fighter capability,” said Teeple, who teaches at the Royal Military College of Canada and is Postdoctoral Fellow at the North American Defence and Security Network (NAADSN).

The need for NORAD modernization is driven by changes in the strategic and the global geopolitical environment, Charron said.

A new generation of threats

The urgency of the NORAD modernization and the paths towards that goal were outlined last fall in a paper written for the Wilson Center’s Canada Institute by the former U.S. NORAD commander, retired Gen. Terrence O’Shaughnessy, and U.S. Air Force Brig.-Gen. Peter Fesler, the current deputy director of operations at the U.S. air defence headquarters.

In the paper, titled Hardening the Shield: A Credible Deterrent & Capable Defense for North America, O’Shaughnessy and Fesler argue that “with innovations in long range missiles and foreign missile defense systems as well as a changing Arctic landscape, threats to U.S. national security are closer and less deterred than ever from attacking the U.S. Homeland.”

O’Shaughnessy and Fesler argue that both China and Russia have developed capabilities to target North America with a new generation of long-range and high-precision conventional weapons.

They say that while the U.S. has invested billions of dollars into building ballistic missile defences to protect against strikes by rogue nations such as North Korea, Washington and Ottawa have neglected investments and upgrades of the continental defensive systems “designed to defend against the range of threats presented by peer competitors.”

Moreover, the various systems in place in many cases simply can’t automatically share information, they say.

“The radars used by NORAD to warn of Russian or Chinese ballistic missile attack, for example, are not integrated with those used by Northern Command to engage missiles launched by North Korea,” O’Shaughnessy and Fesler write. “Even if the ballistic missile defense architecture were to detect a launch from China, it would not directly share that information with NORAD’s missile warning systems.

“The watch standers in the consolidated NORAD and Northern Command headquarters are forced to verbally pass information displayed on independent systems.”

Putting up a SHIELD

O’Shaughnessy and Fesler call for a “more holistic modernization effort” for NORAD.

Northern Command and NORAD have collectively developed a modernization strategy for defence referred to as the Strategic Homeland Integrated Ecosystem for Layered Defence, or SHIELD, they write.

“SHIELD is not a system, or even a system of systems, it is an ecosystem,” O’Shaughnessy and Fesler write. “It is a fundamentally new approach to defending North America.”

SHIELD takes advantage of the data provided by traditional and non-traditional sources to provide a layered ability to detect any threat approaching the continent, from the seafloor to on orbit, in what NORAD and Northern Command refer to as “all domain awareness,” they write.

“It pools this data and fuses it into a common operational picture. Then, using the latest advances in machine learning and data analysis, it scans the data for patterns that are not visible to human eyes, helping decision-makers understand adversary potential courses of action before they are executed.”

‘It’s many things and they are already happening’

Experts say figuring out Canada’s role in this new “ecosystem” will be tricky politically and likely to come at a steep financial cost just as both Ottawa and Washington are deep in the red because of the economic fallout of the COVID-19 pandemic.

“It’s everything from, for example, the runways at Inuvik being extended because right now only the CF-18 Hornets can land there and we need to make it longer,” Charron said.

“It’s things like better communication in the Arctic because there seems to be the potential for more activity there.”

Or it could be something like coming up with a new Combined Forces Air Component Commander to change the command and control structure and allow the NORAD commander to think more strategically rather than to be bogged down by the day-to-day tasks, Charron said.

In addition, upgrades to NORAD capabilities also have to be guided by the need for information dominance, Charron said.

Teeple said Canada can also benefit from Washington’s interest in developing continental defence, including the Arctic by developing infrastructure that has dual military-civilian use.

“This provides incredible benefits if Canada can collaborate,” Teeple said. “And those benefits would be obviously involving collaboration, involving input from Northern Indigenous communities and developing systems that can enhance things like communications and other types of infrastructure in the North that would enhance their quality of life.”

Canadian policy-makers should also think about some of the niche areas where Canada can contribute to the NORAD modernization and the continental defence, Teeple said.

“So enhancing its sensor capabilities for early warning, obviously that involves the upgrading of the North Warning System,” Teeple said.

Other roles for Canada could include non-kinetic disruptive capabilities, such as cyber capabilities, Teeple said. This could give Canada a more offensive role in the new SHIELD ecosystem that would be more palatable politically than hosting ballistic missile interceptors on its territory, she added.